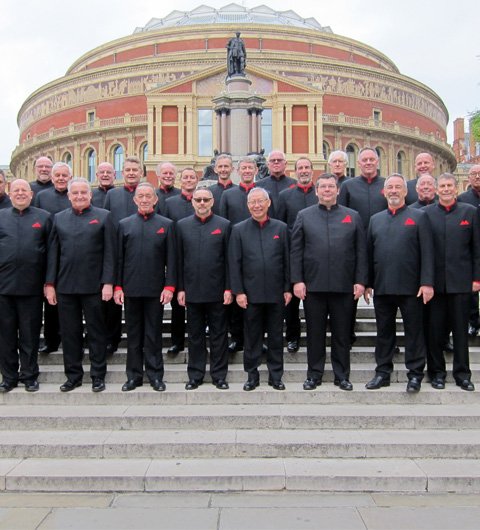 The Hong Kong Welsh Male Voice Choir was founded in 1978.

The saying goes that expatriate Welshmen are known for their predictable behaviour: one will start a chapel, two a committee, three an exiles’ group and four a Choir. Welshmen in Hong Kong are no exception. The Choir had its roots in an impromptu singing of Welsh songs around a piano at the St David’s Society annual ball in March 1977. The singing was not altogether well received and so a plan was hatched to do better at the next ball, the following year. While the second appearance was not exactly of the highest quality either, it was spirited and harmonious enough; and so, bolstered by the support of the St David’s Society, the Hong Kong Welsh Male Voice Choir was officially founded.

By the 1979 – 1980 season, there were over 25 singers rehearsing at the NAAFI in Victoria Barracks. Besides the annual Welsh Ball, there were singing engagements at a folk club, in the submerged tunnel of the cross-harbour railway and at various private functions. An early highlight was representing Wales in an International Artists’ Charity Concert, at which the then Governor, Sir Murray Maclehose, introduced the Choir in memorable fashion, saying that we would sing ‛My Fanny’ (Myfanwy)! In 1982 Sir Harry Secombe attended the Hong Kong ball. He heard the Choir sing and agreed to become its first patron. Sir Harry invited the Choir to perform with him at a concert to be held in Sydney Opera House, but this proposal was rejected by the Australian performers’ union, Equity. The Choir had to wait 25 years to make it onto that particular stage; in 2007, we performed there in a festival of Welsh male choirs, joined for the first time by our current patron, Lord Thomas of Gresford. In the intervening years the Choir’s patron was the celebrated Jack Edwards OBE, campaigner for the rights and welfare of ex-servicemen and their families.

And so the singing continued – supporting Max Boyce on stage and at the Hong Kong Rugby Sevens, on cruise ships such as the QE2, with visiting Welsh choirs, and in annual theatrical shows. In 1997, just before Hong Kong was handed back to China, the Choir sang for the last Governor, Chris Patten, at Government House. The Choir is well travelled. The first overseas trip was made in 1983 when we were invited to sing at the St David’s Society Ball in Bangkok. We have made the journey every year since. The Choir also now travels regularly to Vietnam and the Philippines, as well as to international choral events such as the London Welsh Festival of Male Choirs in the Royal Albert Hall.

Although its founders were Welsh, the Choir of today truly reflects Hong Kong’s cosmopolitan nature. Our ranks include Chinese members as well as expatriates from more than a dozen different countries, many of them long-term Hong Kong residents who have established families and businesses here. But quite a number of the Choir’s 74 current members can claim Welsh roots, or have Welsh connections, and we have many Welsh language songs in our repertoire, ensuring that the Choir is truly Welsh in character. The distinguished Welshman Cllff Morgan once said of the Choir that we “not only match the very best for quality but also show an exemplary spirit”. The spirit and enthusiasm are the same as they always have been and we look forward to the next 30 years.